Why is that? I have a few theories. For one thing, as I learned in twelfth-grade genetics, human beings are programmed by evolution to prefer average features. Average features signal good genes; on the flip side, abnormal features are something to be feared, since they could signal an aberration that might be harmful to us socially, physically, or reproductively. Clowns, with their deliberately exaggerated features, tweak some primeval switch that says, “Run like hell.”

Or maybe it has something to do with the historical origins of the clown, and especially the harlequin variety that is undeniably the creepiest (and is, not coincidentally, the major influence on the costume of the most recent incarnation of Pennywise). The harlequin is thought to descend from a demon character in medieval passion plays. It is, in other words, evil. Even if we aren’t aware of this historical fact, the costumes and behaviours have been refined over the years to inspire dread, even if only on a subconscious level.

Or, you know, it could just be this: 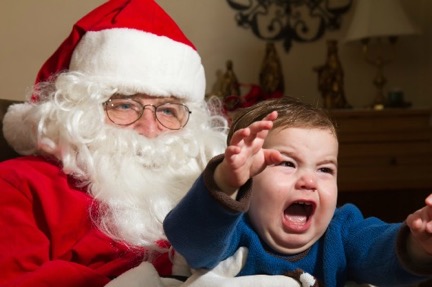 Regardless, clowns are considered by many to be among humankind’s most horrifying creations, right up there with atom bombs and fidget spinners. In tapping into this, Stephen King did what all the best maestros of horror do: anchor their tales in something that tweaks some pre-existing, primordial fear. Like creepy woods, or haunted houses, or haunted houses in creepy woods.

King could have left it there, letting Pennywise’s appearance do most of the work, in the manner of Mike Myers or Leatherface or Freddie Kruger. Instead, he upped the ante by making his creepy clown a mind-reading shapeshifter that could embody the deepest fears of its victims. This was a nice touch, one that worked particularly well in the book, since the 1,000+ page novel was long enough to accommodate so many different incarnations of Pennywise that the author was virtually certain of hitting on one of the reader’s own phobias – spiders, bats, leeches, etc.

Even so, having gone into the movie version with expectations that were more or less perfectly satisfied, Pennywise still left me unmoved.

To be sure, this is no fault of the costume designers or makeup artists. The visuals they created – part harlequin, part spider, part cheetah, part jack-o-lantern – are the stuff of nightmares. Moreover, Bill Skarsgård’s lisping, bulbous, twitching portrayal is genuinely creepy, a sort of psychotic Roger Rabbit using all the tricks of Toon Town to terrify his victims. 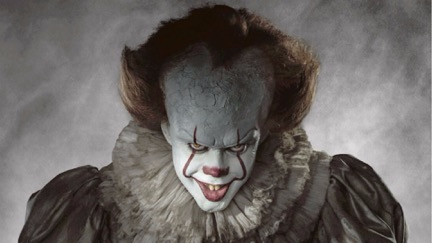 And yet, beyond a scientific sort of fascination, I found It – the movie, and the creature –to be pretty… meh.

Part of this is undoubtedly personal. Fear, along with sex and humour, is among the most subjective of human experiences. Whether you find something funny or offensive, sexy or a turnoff, scary or just plain cheesy, has at least as much to do with you as with the thing itself. For me, when it comes to horror, less is more; I vastly prefer the disturbing, slow-burning, implied-more-than-seen variety of a Seven or a Blair Witch Project to the slasher variety. (I do enjoy slashers, but they make me laugh rather than scream.) Subtle Pennywise is not, especially in the third act of the film – with the result that I found myself giggling more than cringing. And that’s OK, really. But it does knock It out of the running for world’s scariest monster.

Another issue is the film itself, which had a number of shortcomings, the most obvious being that it was least 30 minutes too long, which resulted in a lot of repetition that drained the tension out of key scenes. To me, it felt as though we’d seen most of Pennywise’s moves by the end of the second act, and since his ability to scare is largely rooted in shock and surprise, this had a pretty deflating effect.

More fundamentally, though, I think it comes down to this: Monsters are kinda boring.

I’ve spent a lot of time in this feature looking at what makes a great villain, at least in my estimation. There are a lot of ingredients, and though most villains don’t tick all the boxes, the great ones always include at least a few of these features. Let’s review:

Realistically, Pennywise, like most monsters, really only ticks the last box. With the result that, for me at least, however cool his tricks, he can’t rise to the level of an Al Swearengen, Cersei Lannister, or Khan (1.0).

The trouble with monsters is that they tend to be too simplistic. However powerful or ruthless, their single-minded desire to kill (usually in order to feed, or to satisfy some other primordial urge) is more animal-like than human, which robs them of that key element of relatability. Without a trace of humanity to them, they might as well be a snowstorm or a shark or a giant city-stomping lizard. Now, there is nothing wrong with city-stomping lizards. They can be extremely entertaining. They’re just not villains in any meaningful sense. They’re more like forces of nature. They also have a tough time surprising us, at least beyond the jack-in-the-box brand of jump scare, because they aren’t deep enough to accommodate much in the way of internal conflict or complex motivations.

King seems to have realized this, so he went to some lengths in the book to add some layers to his monster. Unfortunately – and with the important caveat that it’s been ages since I read the book – these layers serve more to confuse than anything. To render his clown less two-dimensional, King adds another dimension – the Macroverse – and gives Pennywise a cosmic backstory. Instead of being merely a child-eating, shapeshifting clown, Pennywise turns out to be an immortal alien entity that originated in a void containing and surrounding the Universe, whose eternal nemesis is a divine turtle. Or something. This is certainly, er… complex, but hardly makes his villain more relatable.

Another thing. While the filmmakers do a great job of making Pennywise visually unsettling, and his actions in both screen and print versions are certainly disturbing, he is continually thwarted by a bunch of kids. This Scooby-Doo element makes it difficult to take him too seriously. Nor is the problem solved when the kids grow up. If anything, the “adult” version of It is even less impressive. (See in particular the 1990s miniseries, with its cheesy, slow, easily outwittable spider). At no point, in any version so far, can I recall considering Pennywise to be clever. He’s powerful, to be sure, but not especially impressive. Especially once the kids work out that if they mock the devil, he will flee from them, at which point he’s essentially powerless. In the movie, this robs the climax of any real tension, rather like watching the last few minutes of a hockey game where your team is up 6-0. They can scramble around and throw as many bruising hits as they like, but that doesn’t make it exciting, because we all know how it’s going to end.

It sounds like I hated the movie. I didn’t. As I said before, it was more or less exactly what I thought it would be – which was, for the most part, fun. But it did reinforce my theory (prejudice?) that monsters have little to offer other than fun, and while I enjoy popcorn as much as the next person, I’m not going to pretend it’s chateaubriand.

That doesn’t mean Pennywise won’t make a great Halloween costume, or, for those of you talented with a carving knife (or power tools), a fucking kick-ass jack-o-lantern. 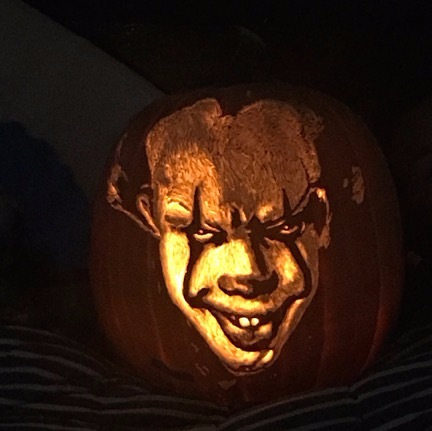 It's the tear lines, yo.

And now, the Machine:

Strengths: Reads minds, shapeshifts, and apparently can’t be killed, except possibly by a turtle. He also enjoys torturing people, and is endlessly creative in doing so, which has to count as a strength if your goal is to “salt the meat” with fear.

Weaknesses: Loses his mojo when you cease to fear him. Also, is easily outwitted by children.

Best Quote: “I’ll feast on your flesh as I feed on your fear.”

Toys: Balloons, mostly, but the shapeshifting has to count for something. 5 points.

Henchmen: None, unless you count the reanimated dead, but it’s never entirely clear if they’re actually there or just a figment of the imagination. 0 points.

Intimidation factor: Scares the shit out of everyone. 8 points.

Schemes - Scope: “Kill it and eat it” doesn’t get you any points. Really, none.

Schemes - Complexity: While not necessarily complex, his manipulations are certainly inventive. 4 points.

As always, if there’s a villain you’d like to see put through The Machine, let us know in the comments! You can catch up on all the previous villainy here.