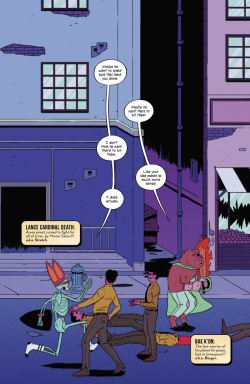 Both Netflix’s nostalgia-fuelled Stranger Things and the latest adaptation of Stephen King’s It with it’s ‘updated’ 1980s setting are proving to be big hits. The world of comics, never a stranger to nostalgia, is front and centre with this trend. Brian K. Vaughn and Cliff Chiang’s Paper Girls, Misfit City by Kiwi Smith, Kurt Lustgarten and Naomi Franquiz or Rick Remender and Wes Craig’s Deadly Class... these all play variously with concepts of youth and the 80s. For my money though, there’s one comic that knocks all of them out of the park and that’s Black Mask Studio’s 4 Kids Walk Into a Bank.

Written by Matt Rosenberg with art from Tyler Boss, 4 Kids Walk Into a Bank is a funny, heartfelt, touching and tragic story which has childhood nostalgia chiseled all the way through it. The eponymous four kids of this story, to use Rosenberg’s own words, are: Pat, “tallest boy in 7th Grade. Used to stutter”, Berger, “11 year old boy...Curses too much”, Walter, “Takes high school science classes. Still wets the bed” and Paige, “Could beat up all her friends. Super smart.” These are the runts, the troubled kids, the tomboys and the losers; pulled straight from a Spielberg movie or Stephen King novel. When Paige’s Dad gets caught up with some ex-con buddies and dragged into a bank heist, she decides to take things into her own hands and beat them to it. (And beat up a few other people along the way, the girl has anger issues.)

Each chapter of 4 Kids is charmingly introduced with a scene of the kids playing: be it D&D (or a similar but legally distinct variant), video games at the arcade, or racing remote control cars. These sequences aren’t simply watching the kids play, but are immersive, fully realised worlds of childish imagination. The comic opens, for example, on a double page spread of a band of warriors going up against a ferocious dragon, complete with D&D-style character profiles. This introduces us to the characters first through the lens of their playing.

As the series progresses and the stakes are raised for the kids, these opening scenes of play start to lose their innocence. The rifts and arguments between Berger and Paige become more serious and when they use their toys to start to plan an actual bank robbery, the corruption of childish innocence becomes chilling. Rosenberg’s spot-on voices and humour only make these creeping emotional moments more impactful, as you realise exactly how deep these kids have gotten themselves.

Tyler Boss, a relative newcomer to comics, proves himself a major talent to watch. His colours in 4 Kids are largely autumnal (orange, red, yellow) but washed out, giving the book a dingy, worn quality that is perfect for a work so inflected with nostalgia. For a book that concerns itself with growing up and loss of innocence, this palette is the perfect tonal range to put readers in mind of transition; something fading and passing. This comic looks like it’s been left out in the sun like an old Coke can and all the reds have faded back to pinks. Punctuating this colour scheme are the moments of brightness, again when the kids are playing. Their time in the arcade playing video games particularly stands out - hot pinks and blues make a big splash - but in a way, this only helps to make the ‘real’ world that much duller. The mundanity of school and bedtimes, or the anxieties of bullies and bank robbers, can never compare to safety and excitement of an imaginary world. 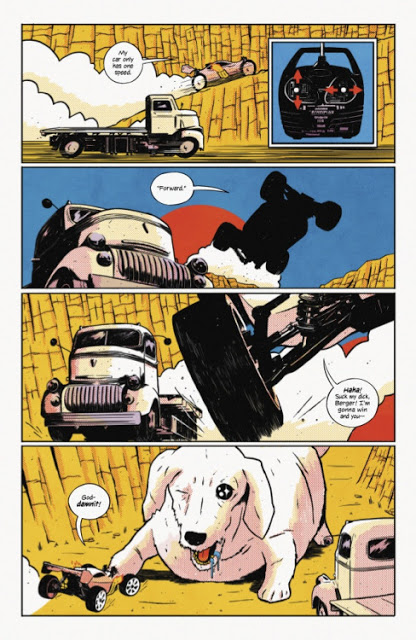 Boss’ art is somewhere on the David Aja/Chris Samnee spectrum, with simple linework and flat colours, but with a strong attention to communicating emotion with his faces and innovative story telling. One such example is using dozens of small squares to present the 4 Kids (and one notable interloper) having a conversation over radio (oh yes, the Ham Radio strikes again). While this sort of thing may have been seen before - it’s a favourite of Brian Michael Bendis after all - it allows Boss to shine with panel after panel being a full face close up. His subtle changes to their faces communicate the fear, humour, anger and so on that the kids go through in this one heated exchange.

Later, when Paige breaks into the house of one of the school bullies, Boss uses a top down cutaway of the house to show simultaneously the various people moving about the house. In a single glance this image conveys movement, time and tension as we have Paige searching the bully’s bedroom, the bully’s moving through his house, and his mother being distracted at the front door. You can hear the ticking clock before the bully comes back, feel Paige’s heart hammer as she searches, and laugh at the inept lies being told to keep the mum at the front door - all done simultaneously in a single, perfectly composed piece of art. It’s one of those things that can only really be done in comics and its expert deployment shows an artist totally at one with the medium. This understanding isn’t solely limited to the set-piece scenes, as Boss utilises a range of small and interesting techniques throughout, like magnifying important parts of a panel or using symbols to visually convey information about characters.

It is easy to be distracted by the nostalgia, the loss of childhood innocence, and just how good the art is in this book. But, importantly: 4 Kids is really funny. It’s always easy to enjoy reading about a bunch of friends bickering, especially if they’re foul-mouth kids, but Rosenberg doesn’t stop at that. The kids using LEGO men as stand-in hostages for their robbery planning is hilarious, as are their character names for their games. Paige’s habit of getting one over on just about everyone - and then cockily letting them know exactly what she’s done is priceless (there’s a particular scene with spit and milkshakes that is a standout).

Even if you took away all that humour, you’d still be left with an action-packed, heart-warming and inventive story of kids pulling together to save each other. So, if you’re enjoying riding this crazy nostalgia wave we all seem to be on together, read 4 Kids Walk Into a Bank. It won’t disappoint. Gag me with a spoon, I’m Audi 5000.