And even if you haven’t, unless you’re living under a rock on Jakku, you’ve been so bombarded with hackneyed merchandising that you might as well have. In which case, just get it over with. It’s pointless to struggle; the sarlacc has its tentacle around your ankle, dragging you inexorably toward the bottomless pit that is Disney merch, where you will be slowly digesting Star Wars for the next thousand years, or at least it will bloody well feel like it. 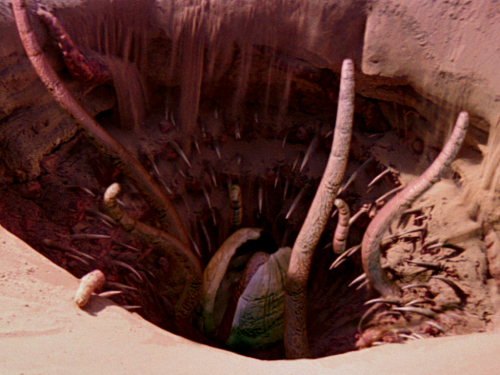 Please pass through the gift shop on your way out.

Sorry, I got sidetracked there. Point is, no spoilers here. (Though I can’t guarantee there won’t be any in the comments, so beware.)

We don’t really need them anyway. Because if you’ve seen The Force Awakens, then you know more or less what to expect from The Last Jedi. That is, a Star Wars film very much in the style of the original trilogy, where you can nod your head to the beat while still being surprised at key moments – all of which is a very good thing.

Jedi picks up where The Force Awakens left off, with Leia and her ever-shrinking fleet limping away from the Imperial – er, First Order – forces, low on fuel and lower on morale, trying to find safe harbour before the eldest Weasley brother blows them out of the sky. Elsewhere on the star destroyer, Kylo Ren is having his ass chewed out by Supreme Leader Snoke, who somehow expects us to take him seriously even though his name sounds like a card game for eight year-olds. Snoke is scornful of his apprentice’s post-patricide depression, mocking Kylo’s scars, physical and emotional, and questioning openly whether he’s made the right choice in his deputy. (Afterwards Kylo, in a fit of pique, smashes his Darth Vader wannabe mask, so we know he’s pissed.) Meanwhile, over on the island of Ahch-To, Rey completes the Baton Pass of Fate by handing over the lightsaber to a grizzled Luke Skywalker.

The movie then splits into three (and a half) distinct storylines: Leia, Poe, and the escaping rebels; Rey, Luke, Chewbacca and some tribbles ewoks porgs; and Finn, BB8 and newcomers Rose and DJ, with the half storyline belonging to the occasional glimpse of Kylo Ren and various First Order shenanigans. What follows feels at times like a Star Wars Greatest Hits reel, but mostly in a good way. Mostly.

Jedi paints in the same greyish palette as The Empire Strikes Back, focusing as much on internal conflict as on interstellar dogfighting (though there is no shortage of that either). Kylo’s conflict, and Rey’s, reflect and play off one another, while Luke’s cynicism and regret put him somewhere between the whiney farm boy he once was and the cranky, mischievous old hermit/Jedi Master he met on Dagobah in Empire Strikes Back. Luke’s conflict is arguably the most affecting of the three, if only because we’ve invested in this character for longer, and it’s both surprising and compelling to see how differently he’s turned out than what we might have expected after the end of Return of the Jedi all those years ago. (And for those worried about missing curmudgeonly, wry Han Solo too much in this movie, never fear – Luke’s got you covered.) 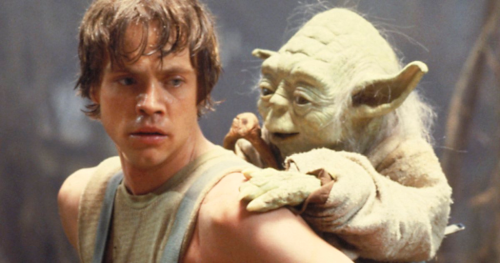 When your turn it is, grumpy as me you will be.

Luke’s choices in this movie, and those alluded to from the period between the end of Return of the Jedi and The Force Awakens, are complex and flawed, and some will no doubt take issue with that. To me, it’s not only appropriate for a movie exploring a more nuanced moral universe, but a perfectly plausible progression of Luke’s character, from a conflicted boy driven by purpose to a conflicted man weighed down by bitter experience and left questioning his faith and the absolutes that once drove him. It’s hard to expand on this without getting spoiler-y, but some of the movie’s most interesting moments explore the cracks that can open up between spirituality and religion, and delve deeper into the nature of the Force than anything we’ve seen before. The film also challenges a few of our own tried-and-true beliefs, skilfully subverting tropes and juxtaposing the visions of characters so wrapped up in complexities and distant horizons that they seem paralyzed and those so focused on the here and now that they might just win the battle to lose the war.

Jedi veers further away from the original trilogy than did TFA, though still not very far. At times, it feels as though someone took the scripts from The Empire Strikes Back and Return of the Jedi, tore them up into little pieces and tossed them in the air, then reassembled them randomly. Individual snippets are very much familiar, yet they come together in fresh and surprising ways. That being said, those ways don’t always feel quite as satisfying as they should. Sometimes, they feel… well, random. It’s hard to tell if this is just an unavoidable consequences of mixing up the familiar or something more fundamental.

One of the storylines, in particular, feels a bit too side quest-y and superficial, while another feels repetitive and struggles to gain traction. The movie is also about thirty minutes too long – all of which, I suspect, stems from the same root problem: Namely, that the movie was trying to do a lot, and maybe too much. Three separate storylines is tough to pull off. At times this narrative split works well; at others, the jumping back and forth feels disruptive, and the cliffhanger cutaways too frequent to be effective. It also ends up dragging by the end, if simply as a result of overload. (I was left with that Peter Jackson feeling of holy shit is there another scene??? Which is a sign you’ve overstayed your welcome.)

Even so, there is plenty of excitement, including some genuinely awesome as fuck moments, to carry us past those bumps. As always, the critters delight and amuse. The visuals are stunning, especially in the last act of the movie, and the dialogue and performances stand out as among the best in the franchise (though admittedly the bar isn’t all that high, on the first point especially). 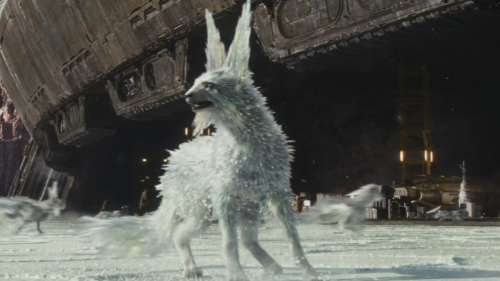 Best In Show: The crystal foxes of Crait.

If you’re the sort to get hung up on canon, there might be a couple of eyebrow-raisers, and some people are probably going to obsess about porgs, but honestly, if you let those things get in the way of your enjoyment, it’s your loss. Because though flawed it might be, it’s still a helluva ride.