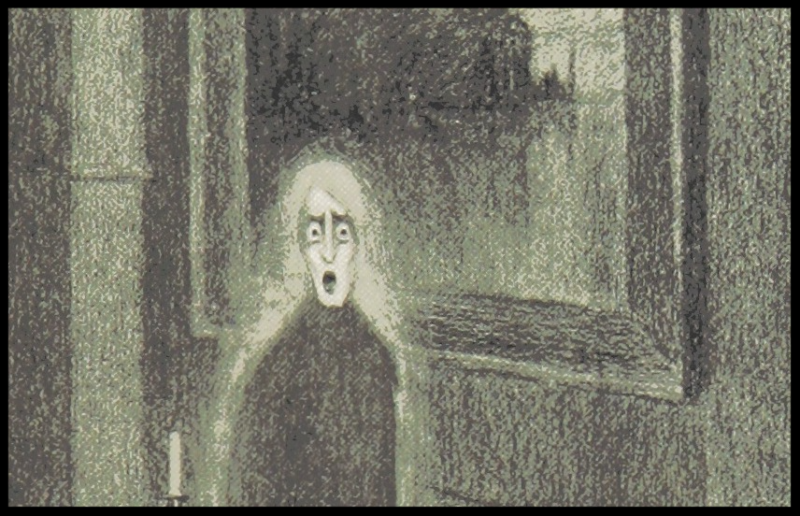 "Ghost with a Knife" from CBS Radio Mystery Theatre, originally aired on Dec. 16, 1977. Listen along here.

I am going to listen to something called Ghost with a Knife because ghosts are scary and knives are scary so this should be scary as heck, right? I DON’T KNOW! I GUESS!! Now here are some questions regarding this radio drama, raised by Illustrious Acquaintance and an assortment of friends who would be very offended to hear me refer to them as friends (WE COULD BE FRIENDS THO JUST SAYING)

Is the knife also a ghost and if so, how did that happen?

Why doesn’t the ghost have a gun?

Do we have to listen to this too?

Isn’t a gun a more effective weapon than a knife? Or is it different for ghosts?

Does the ghost have a pocket to keep this knife?

Is this that one about egrets? (I DON’T KNOW! MAYBE! I HOPE SO!)

So this one is from 1977. Which, as the youth inform me, was a really long time ago.

He’s quoting some Egyptian something? Not really listening because I’ve already assumed it’s going to be racist, which in itself is super-racist and I’m sorry

Sudden segue to someone called Rebecca? Telling some dude about a ghost she saw that was wearing green pants

He also had a beard and a knife

Seriously impressed that she noticed this ghost was wearing pants

In real life, we often notice when people are NOT wearing pants

When I was a small youth I read this story about some purple pants and these pants scared me to heck.

I hope it was a horror story.

Anyway, this story was adapted from an actual psychic case study!

Not sure that warranted an exclamation mark. Anyway.

I think this is from a psychic case study from Bryce Bond who is a psychic scientist.

Is that an actual thing?

For whatever reasons, BryceBond thinks they should look on this ghost with a knife as a friend

This is the ghost apparently

The house has two oil burners

They are talking way too much about oil burners

“The house was built in 1929 so the old oil burner didn’t owe us anything.” WHAT DOES THIS EVEN MEAN

This does not seem like a friendly thing to do imho

BryceBond says this is the first time he has heard of an entity holding a knife. ME TOO BRYCE

And the other guy, the guy with the camera, whose name I think is David, is going into the cellar with Leo who is the husband of aforementioned Rebecca

I think the ghost killed a houseplant or something

If you ever need a plant to die, I am the right person for that job

“We watch them, water them, but they all die.” EXACTLY

We still have like half an hour to go here

The house is now getting hot because, apart from wearing green pants and carrying a knife, this ghost also likes playing with the thermostat

Wow this is making me so sleepy

Now a voice is telling us this all really happened and the family lived on Locust Avenue. Because I am from a non-American culture and paying attention to the wrong things, I am finding it interesting that one would name an avenue after a locust

Ok! Well I guess we are into act 2 and the ghost has tripped Rebecca a couple of times while she was going down the cellar steps

The ghost seems to be a bit of a jerk tbh

So there was some boring conversation and then Leo said I haven’t been to the cellar today and David was like uh yes you have, you showed me the cellar just a few minutes ago NICE!

David asked if Rebecca could see anything and she said I have my eyes closed and he said I know that. Really, that happened

Rebecca can now see the light in her mind’s eye. I guess it’s really great

David, apart from being the camera fellow is also a medium!

He is a dude of many talents

David is now in a trance and he’s making his face look like the ghost’s face? idk

The ghost wants to speak through BryceBond!

I think the ghost via BryceBond said no harm. Or ho hum

And then he thanked BryceBond for the voice usage

BryceBond is shook about the voice usage

I didn’t know ghosts worked like that but ok

Don’t you need a priest for an exorcism? Is David also a priest?

They are going to exorcise every room

It looks like they are going to use the cross but not as a Christian symbol, which is nice I guess

They both had a really tedious conversation wow

The ghost is making noises

The ghost is gone

The ghost is in the oil burner room SHOCKING

I think the ghost is saying there are death leaks!

Now they’re like omg there actually IS a gas leak here YOU’RE JUST NOTICING THAT NOW??

They are now on the phone with a man and the man on the phone is like you have an oil burner? Can you switch it off? Because they hadn’t done that yet even though they knew there was a gas leak oh wow

This all happened in real life btw. In case ya’ll forgot.

Now there’s some special something we are going to learn

Ideally I would like to ask so many questions because there are SO many questions right now but since this happened in real life, I don’t think we can do that because who are we to question real life? So I will just say bai deers. Bai deers.

Image from Ghostly Tales (1896), via the British Library

"Ghost with a Knife" from CBS Radio Mystery Theatre, originally aired on Dec. 16, 1977. Listen along here.

I am going to listen to something called Ghost with a Knife because ghosts are scary and knives are scary so this should be scary as heck, right? I DON’T KNOW! I GUESS!! Now here are some questions regarding this radio drama, raised by Illustrious Acquaintance and an assortment of friends who would be very offended to hear me refer to them as friends (WE COULD BE FRIENDS THO JUST SAYING)