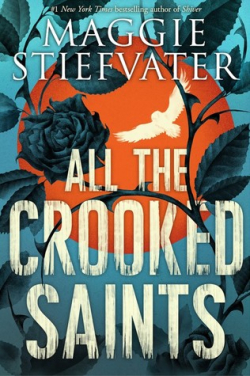 A slightly grown-up revelation: even when I like an author's work, I don't have to like all their work. (If only I had learned this a long time ago, it would've saved me a lot of Piers Anthony.) I sing the praises of Maggie Stiefvater, but I do so recognising that I've only got a .500 batting average with the Stiefvater ouevre. The Scorpio Races, The Raven Boys: good, clean hits. All The Crooked Saints, I'm afraid, was a strikeout. The premise is promising enough: a family of saints, in the Colorado wilderness, doing their best to sort out other people's problems while also juggling their own. Plus, obviously, teen angst, a bit of lurve, some insightful socio-religious commentary, courageous/intellectual female protagonist.

Saints should've resonated, but on a line-by-line level, the novel is so overwhelmingly arch I got homesick for Missouri. Everything is wry and whimsical; each paragraph a delicately constructed pile of fragile non sequiturs. It is magical realism of the most excessively explicitly variety, where every single thing is just the slightest bit wacky, a recitation of foibles that comes off like Eloise, as directed by Zach Braff. It is undeniable clever, mechanically interesting and, sadly, also quite chilly.

Books with similar themes (and construction) that worked a little better for me - Robert Jackson Bennett's American Elsewhere and, above all else, Dia Reeves' Portero books.

The Talisman Ring starts like any other Heyer. A proud young noble! A flighty young woman! A forced engagement! Hijinks! But, as with all Heyer, it contains the capacity to surprise. From that set of stock characters, the truly bonkers emerges: a romance (two, in fact), a mystery (although not a very mysterious one), oddest of all, a slapstick comedy. I knew Heyer could be wry, and I've dared to chuckle once or twice but... The Talisman Ring is actually hilarious. There's a young couple, both of whom are so dead keen on le grand amour! that they can barely operate in polite society. There's a proper Laurel & Hardy team of bumbling Bow Street Runners. There's a silky and snarky villain. And, of course, there's a perfectly composed couple in the center of it - the only two 'grown-ups' in the piece, which means that they spend most of their time winding one another up in really distinctive ways.

The whole package is delivered in Heyer's trademark style, in which the Regency world-building is seamlessly absorbed by the reader. Of all Heyer's literary talents, her ability to incorporate Regency dress, culture and language is, perhaps, the most impressive: despite peppering a book with completely new words, she makes it invitational, and not exclusive. I used to be the sort of person that took the piss out of people who laughed at Shakespeare plays (actually, I still am)... but, well, now I've become that dude giggling at Heyer, so... glass houses? 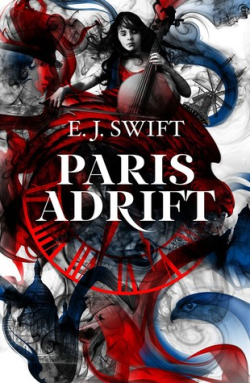 E.J. Swift's Paris Adrift is her best novel yet: a time-travelling adventure that, despite the cosmic stakes, is bravely and beautifully intimate. Despite the apocalyptic backdrop, Paris is also wistfully hopeful - a novel of ordinary, extraordinary heroism.

Cleverly, Paris never conceals its stakes. At the very beginning, we see the world coming to a horrific end. A band of time travellers identify its last - and only - hope: if only a few small things can be changed, disaster can be avoided. Cut to - Hallie; modern day. She's a Docs-wearing student dropout who has found her way Clichy, desperately looking for a bar (or any) job. What she finds at Millie's bar is more than employment: she finds friendship and family amongst its community of overeducated, underachieving expat outcasts.

Hallie is, of course, our unlikely saviour. The events required to Heal the World need Hallie to push x slot and y lever (temporally speaking). But she's never done this before, her only guide is a phantasmal psychopath, and, as you can expect, there will be some floundering involved. Things happen - across multiple eras, Hallie makes decisions, time passes, etc. As an adventure, Paris Adrift is never coy. We know (even if Hallie doesn't) what is happening, why it is important.

However, taken as more introspective novel, one of self-discovery, Paris is constantly surprising. Why is Hallie an unlikely saviour? Why do we start from the expectation - shared by Hallie! - that she can't achieve greatness? Hallie and her friends (in all times) are held captive in Clichy, cast (figuratively) adrift from the rest of the world by their pasts and their constructed self-image; their fears and their doubts. Hallie is chosen - a time traveller - not through any cosmic intention, but because of sheer, random probability. Which means, if she can do it, so can we all.

More Pompidou Posse than The Time Machine, closer to The Goldfinch than 11.22.63, Paris Adrift uses science fiction's largest and most unwieldy mechanic for its smallest and most intimate stakes: this isn't about the world, it is about Hallie. Paris is a story about significance at every level, individually and collectively; ultimately, whether that's in time, life, or simply one's outlook - this is a poetic demonstration of how little changes make big differences. Despite being a novel that's - literally! - timeless, you couldn't find a work more wonderfully fitting for 2018. 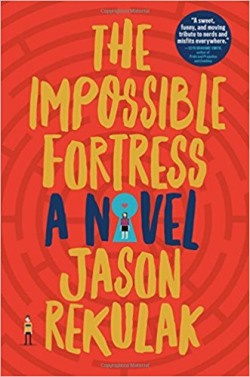 Jason Rekulak's The Impossible Fortress is, on paper, exactly my thing. An American coming of age story featuring likeable geeks, a mystery/YA crossover, charming plots about video games and BASIC programming (which, yes, I did - but badly). I mean, I am the nostalgiaporn heartland for this. Alas, it just doesn't quite land. Billy Marvin and his friends are out to find the holy-of-holies: the Vanna White issue of Playboy. In order for their Goldbergian plan to succeed, Billy needs to 'seduce' Mary, the 'fat girl at the computer store'. Shock of shocks, a boy, aged 14, winds up falling for a girl that he spends more than 15 seconds around. Twist!

But there are also mysteries! And layers! And plots! It is very, very cute, and occasionally even charming - but what The Impossible Fortress never quite dispels is the troubling fact that Mary's story is the more interesting one. She's the smarter one (and the more talented one), with real choices, a real history, and real conflict. But she's also the one stuck behind the computer, cleaning up Billy's code, talking him down, cheering him up, and generally sacrificing her own interests for his.

Meanwhile, Billy's problems are almost entirely of his own making - and his character growth is, well, kind of negligible. Billy is empathetic, and well-written, enough that he's still worth cheering for - he's blinkered but well-meaning - but it is still hard to read him as the 'hero' of the piece. Whether that perspective is intentional or not, it makes for a slightly frustrating book: a second-tier man getting the spotlight over his vastly more impressive female counterpart. (See also, Anne's review of The Lego Movie.) 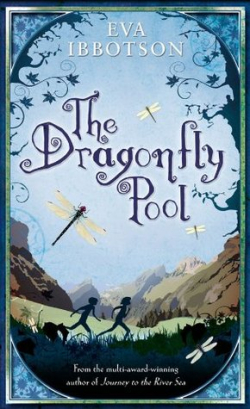 I genuinely thought Eva Ibbotson's The Dragonfly Pool was something written in 1960, not 2008. Not because of, say, representation issues (it is exceedingly progressive and squishy-hearted) but because the whole thing is just so eerily nice.

Delderton Hall is a boarding school in the lovely British countryside, populated by an eclectic mix of oddballs and evacuees. Something something folk dancing festival something something tied up in the politics of a Zenda-like country facing Nazi occupation. Something hijinks. Something. It is pure Disney (the fluffy kind, not the Rogue One kind). All of the good guys are very quirky, but not the least bit bad. And all of the bad guys are very quirky, and not the least bit scary. There are genuinely misty-eyed moments where Children Band Together and Achieve Things, and the whole thing is very easily classified as a rollicking triumph of the human spirit. There's also clever interweaving of the story of Persephone and Demeter that's well handled (and clearly sign-posted) throughout, and there's real joy when everyone finds their (literal and figurative) light.

I do, however, feel some unease about the overlap between Dragonfly's fantastical kingdom of Bergania and, you know, actual history. Nazis shouldn't be blundering, cartoonish buffoons - hell, even The Sound of Music knew to make them scary. And, although Dragonfly conveys, in broad brush strokes, that bad things are out there, it invariably errs on the side of playful. The real villains - the ones conveyed most compellingly and horribly - are a collection of pompous royal exiles, all desperately recreating their feudal hierarchy while on the run from other quasi-fictional lands. The Nazis, meanwhile, are just a sort of goofy background plot vehicle, largely forgotten as the book goes on. A book for kids, yes, but so was Code Name Verity and When Hitler Stole Pink Rabbit. Peppy, happy-go-lucky adventure make for  'Nazi Occupation' make odd bedfellows. 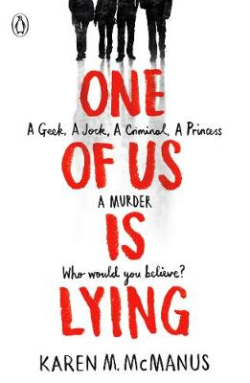 Finally, One of Us is Lying, the super-hot Breakfast Club x The Secret History mashup by Karen McManus. Four archetypes - the geek, the jock, the princess, the outsider - all in detention. BUT SOMEONE DIEEEEEEEEES. I can't describe how shameless this book is: if a TV Tropes page spontaneously achieved sentience, One of Us would be its first words to the world. Every one of the characters has a secret (zomg), and every single one of those secrets is so painfully obvious that you'll guess it by the end of their first POV chapter. By the numbers or your money back. Ditto, the killer. Ditto, the 'twist'. Ditto, the tidy conclusion for every single storyline.

Does this make One of Us a bad book? Well, yes. No. Wait, no. It depends? It is page-turning and popcornily snackable, so, no. This is a great book for commutes, air travel and, in general, distress purchasing. And that's a relief - as far as trope volume goes, we're not yet at the point of diminishing returns. But it is a mystery-without-a-good-mystery and a character-profile-without-characters. It adds absolutely nothing: One of Us investigates nothing, probes nothing, challenges nothing - it is post-post-revisionist contentment, a nostalgic concatenation of the comfortable and obvious. Teen thriller as Markov Chain. What a wonderful world.