I have read David Eddings' Belgariad so. very. many. times. My Mastermind category is Polgara's stitching. I can retell the battle of Vo Mimbre better than Belgarath. My fantasy tattoo would be 'why me?'.

They're littered with racial essentialism, the female characters are pretty awful, and there's absolutely nothing not predictable about them. (To give Eddings credit, the latter is intentional: the prologue to the first book literally tells the entire story, but then he makes the characters so goddamn loveable that you wind up reading all 85,000 pages anyway.) BUT, it is also the warmest, coziest, snuggliest fantasy epic I can think of - my go-to books when I'm feeling under the weather, or, in this case, trapped by it.

Tillie Walden's The End of Summer is a beautiful graphic novel about a family trapped inside a secluded, slightly surrealist, castle for a lengthy winter. Think Game of Thrones meets Gormenghast, as told by Shirley Jackson. The result is sometimes bizarre and always moving, as Lars and Maja become increasingly detached from reality in the dreamlike cocoon of their surroundings. A truly stunning work.

Larry McMurtry's Lonesome Dove makes me hungry? This is an immensely physical book. It travels across the continent (and the years), and exposes the reader to wind and rain; snow and storm; sunstroke and starvation. So it is no wonder I always wind up craving hot biscuits with honey on them. As long as I'm bundled up and ready for anything, might as well head west...

There's a Georgette Heyer for every situation, but for heavy weather, I'm going with her lightest book - Cotillion. It is easily the frothiest of her ouevre: charmingly dimwitted characters doing charming and dimwitted things, and never really much in the way of risk or conflict. But it is also wonderful and huggable and nice, and everyone gets the happy ending they deserve. Warm fuzzies to ward off the chill.

Jenni Fagan's The Sunlight Pilgrims is the exact opposite: sharp, tortured characters, operating under a pall of apocalyptic tension. The story of a handful of people in a trailer park, marking time until the new Ice Age sweeps over them. It is triumphant - in a grim way - as they achieve a sort of ordinariness in the face of inevitable extinction. As with anything Fagan, the writing is utterly superb: lyrical and hypnotic. 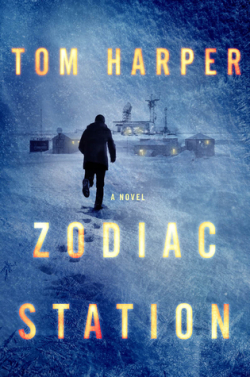 Cold weather needs cozy reading: I nominate my favourite Christie, The ABC Murders. Christie plays with her formula in this one just enough to make readers question themselves, and Poirot is slightly less annoying than usual.
But cold weather also needs cold reading. I loved Tom Harper's Zodiac Station, a smart and superbly written, action-heavy thriller takes place in a remote research station deep in the Arctic. A bunch of geneticists, some angry polar bears and a lot of very cold weather - what could possibly go wrong?
Right, we've done cold and we've done cozy. Let's move on to The Wide Sargasso Sea, Jean Rhys' take on Jane Eyre: heat and humidity positively radiate off the pages in this deeply internal novel about a woman's descent into madness.
Speaking of madness: the descent continues with Donald Westlake's bleak (and Black Tentacle winning) posthumously published novel Memory. It's about as dark and depressing as midcentury noir gets, and it's also stunning.
Wow, that got dark. Let's end with something cheerful, to remind ourselves that spring is truly on the way. There's a book out there that feels like a warm hug, and it's called The Long Way to a Small, Angry Planet. Spending a couple of hours with the crew of the Wayfarer is probably the best way to enjoy a cold day - or any kind of day, really.

*We've also made a donation to St Mungo's. Not everyone has the benefit radiators, blankets and cats. If you can, please help out.