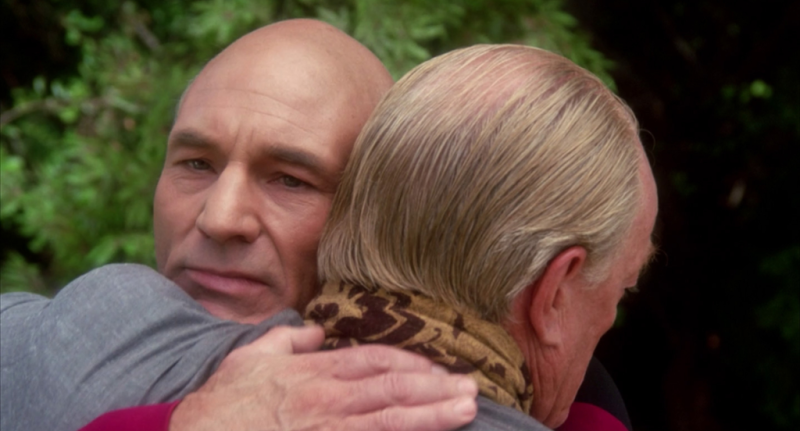 People want to talk to me about Star Trek because of Discovery, a topic on which I am mixed. Much digital ink has already been spilled on what did and didn’t work in its first season, and oh yes, I have capital-O Opinions going in both directions. But this is the last month ever of Pornokitsch, and Pornokitsch has been a place where I could wax freely about microscale stuff that I wholeheartedly love. So in that vein, today I’m going to tell you about one of the most important episodes of Star Trek that ever aired: “Family,” from season four of The Next Generation.

In my mind, I’m standing now at a podium, and both gallery and floor have erupted in protest. “What about ‘Space Seed’!” the crowd cries. “’The Best of Both Worlds’! ‘In the Pale Moonlight’! ‘Far Beyond the Stars’!” And there, I’ll have to leave the stage and rethink my whole deal, because “Far Beyond the Stars” is outstanding. But no, “Family.” I’m here to talk about “Family.”

To do that, I first have to get into — yes, peanut gallery — “The Best of Both Worlds,” which you will justifiably find somewhere in every top-ten list about Trek. In a chain of events that seared themselves permanently into my very young brain, Captain Jean-Luc Picard is captured by the Borg and assimilated into their hive mind. His body is remade with hellish robotic implants. His vast knowledge of Starfleet tech and strategy is used to lay waste to thirty-nine starships, all in one go. His crew is left with a terrible choice: risk more death and destruction, or kill the being that might still be their leader.

Spread across two episodes that were separated by an interminable summer, “The Best of Both Worlds” is violent and explosive, a nail-biting rollercoaster. It’s the moment that launched TNG from fun spinoff to pop culture juggernaut. No story from ‘90s-era Trek is more widely known. Even if you don’t know Trek, if you’re into sci-fi, there’s a damn good chance this image will look familiar to you: 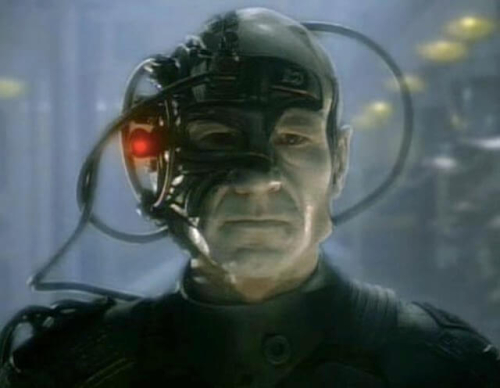 Naturally, this ratings-boosting thriller was followed by an episode about Picard working through emotional baggage with his estranged brother on their family vineyard in France.

That is not a joke.

There are no starship battles in “Family.” There are no warp core breaches, no hostile aliens, no firefights (there is a fight, but we’ll come to that). Nothing about this episode has much of anything to do with being in space, and indeed, most of it happens on the ground. “Family” consists of three threads: Picard returning to his hometown for the first time in twenty years, Worf’s adoptive human parents coming to offer emotional support after his being excommunicated from the Klingon Empire, and Wesley Crusher receiving a hologram message recorded by his deceased father.

That’s it. Seriously, that’s it.

I’m not going to dig into the subplots, even though the Worf story is rather sweet (poor Wesley, they never knew what to do with him). Picard is the crux here. Keep in mind, up to this point, both Star Trek series were poster children for monster-of-the-week. Characters refer to things that happened in past episodes, but often with brevity. (Oh, you got wrongfully imprisoned? We’ll never talk about that again! Aliens did weird experiments on your brain? Bah, that was yesterday, time to move on!) If you look past the surface-level corniness of early Trek and take its content at face value, you realize these people are dealing with trauma after trauma. Body horror, mind control, forced surgeries, torture, war, grotesque disease…the list goes on. There is some acknowledgment of this in the fact that the Enterprise-D has a psychological counselor aboard, but even so, Starfleet officers keep on truckin’ after experiences that would make the average human being completely lose their marbles.

The episode opens with Picard and the aforementioned counselor, Deanna Troi, discussing his decision to follow up his physical recovery from the Borg ordeal with a visit to his childhood home. He’s insistent that there’s no connection between the two; she’s less convinced, and for good reason. Jean-Luc and his older brother Robert have no shortage of bad blood between them, and their late father disapproved of his more famous son’s decision to join Starfleet until the very end. This is not a vacation for Picard. This is a confrontation, a harsh questioning of why he ever left the safety of home for the dangers beyond.

The tension between Jean-Luc and Robert comes to a head late in the episode, culminating in a fist-throwing brawl through their ancestral crops. They fight, they exhaust themselves, they laugh and sling mud. On a dime, Jean-Luc’s dam breaks. “You don’t know, Robert,” he says (and bear in mind, this is Patrick Stewart in all his glory), “you don't know. They took everything I was. They used me to kill and destroy, and I couldn't stop them. I should have been able to stop them! I tried. I tried so hard. But I wasn't strong enough, I wasn't good enough! I should have been able to stop them.”

And our brave captain, skin and psyche still scarred, sobs in the dirt.

There are better episodes than “Family.” There are episodes that are more fun, more polished, more seamless. But that moment, that moment of seeing Picard at his most vulnerable, that’s what makes me ride-or-die for him. It’s not just his compassion, or his wisdom, or his grade-A monologues that I carry around in my figurative pocket to this day. Knowing who he is beneath the captaincy is what makes him my dude.

If that moment had been rushed, it wouldn’t have mattered. Imagine that Picard had simply said “I’M HAVING A HARD TIME RIGHT NOW” as we ran down the hallway to the next disaster. It wouldn’t have meant anything. The audience needed to spend the better part of a primetime hour having quiet experiences with him — walking the vineyards, bantering with his nephew, eating a bowl of unreplicated soup — in order to let the whole thing land. We needed to process, just as he did. We needed the dust to settle and the wounds to close. “Family” is not the highest point of TNG; “The Best of Both Worlds” arguably is. But without “Family,” that kickass cliffhanger would’ve been just another monster-of-the-week. This low-key follow-up was a crucial ingredient in TNG’s overall success, one of the many softer stretches of connective tissue that made us care all the harder and cheer all the louder when they cranked the action back up again. Given the splash that “The Best of Both Worlds” made, “Family” was a bold choice for the showrunners to make. I’m forever glad they stuck to their (lack of) guns.

And that’s all I have to say about Discovery.