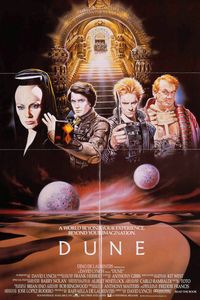 Happy 50th Anniversary, Dune! To celebrate (?), we've put together a special edition of Films of High Adventure. Why's it so special? Well, we have Jason Heller, Hugo-award winning editor, author of Taft 2012, and writer for the A.V. Club and NPR here with us! As Jason is a consummate Dune (the novel) fan-cum-expert, we thought it would be fun (for us, at least) to ask him to watch Dune with us, and see if it stands the Films of High Adventure test of time. Heh.

There are roughly 9000000 versions of Dune out there, and we actually tried to watch the 3 hour version of Dune for this... but from what we saw it was mostly a camera panning over watercolors of planets. So we ditched it and went for the director's cut (I think?), which is the pretty dang long, but not the longest version. It's the one we all watched/remembered, so it was more authentic that way.

Responsibility Roundup: While it may seem unfair to hold Frank Herbert accountable for the film, credit where due—he did write the novel. Given all the liberties taken with the text, it seems most accurate to view Herbert as the Great Maker, and writer-director David Lynch and executive producer Dino De Laurentiis as two rival barons fighting to the death over the intoxicating essence produced by their sandworm cash cow. It’s not surprising that the film came to be defined by their conflict, since Lynch is of course best known for his heady, esoteric creations like Mulholland Drive and Twin Peaks, whereas De Laurentiis is synonymous with meaty, straight-forward fare like Barbarella, Conan the Destroyer, and dozens of other Films of High Adventure candidates. Photography by Hammer and Amicus alum Freddie Francis (Torture Garden), production design by Anthony Masters (2001: A Space Odyssey), costume design by Bob Ringwood (Burton’s Batman), and soundtrack by Toto and Brian Eno. 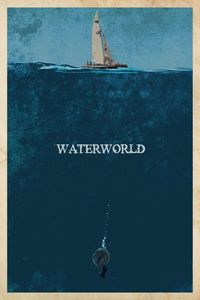 Responsibility Roundup: We usually start this section with the director and writer or writers, but real talk here, we all know there’s only one person to blame for this turkey of the sea, and that’s Kevin Costner. Not only does he “act” in the film, but he reportedly sunk millions of his own money into the film as producer and backseat-directed the whole damn thing. Tempting though it surely is to hold Costner fully accountable, we must nevertheless give credit where credit is due to the rest of the cast and crew—after all, there’s plenty of guilt to spread around.

Kevin Reynolds directed, though he really should have known better after working with Costner on Robin Hood: Prince of Thieves. The script was apparently re-written three dozen times, but final credit went to David Twohy of the Chronicles of Riddick franchise and a dude named Peter Rader whose sole previous credit was a mid-nineties remake of Escape to Witch Mountain. Joss Whedon allegedly did some last minute rewrites, and the movie’s certainly bad enough to make this sound plausible. Supporting roles by Dennis Hopper (Blue Velvet, Easy Rider, and the Super Mario Bros. movie), Jeanne Tripplehorn (Basic Instinct, Big Love), a bunch of character actors, a youngish Jack Black, and Tina Majorino (Veronica Mars) as the kid.

Alternate quote: “Well, I'll be damned. It’s the gentleman guppy. You know, he’s like a turd that won’t flush.” 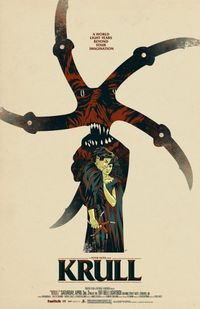 Welcome… to Films of High Adventure!

Some of you may recall that Jesse Bullington and I used to do these columns pretty frequently on our blogs and Fantasy Magazine, back (as the kids say) in "the day." The idea was that we’d re-watch films that one or both of us saw as youths, and compare our remembered reactions then to our feelings as adults. Some withstood the test of time pretty well—say, Barbarella. Others… not so much. Hey—The Craft? I’m looking at you.

The initial inspiration for the column was me not having seen a lot of iconic genre films from the 70s and 80s, or from the 90s for that matter, as a child. For whatever reason, while I have seen nearly every Disney film, Hitchcock entry, or movie featuring Fred Astaire dancing, I never saw Robocop, Willow, Predator, The Abominable Dr. Phibes… you get the idea. After Jesse showed me Conan the Barbarian when I was perhaps 27, and enjoyed watching my reactions as much as the film, we decided to blog about the experience, with each showing the other unfamiliar films, or settling in for a simultaneous return to childhood. For good or for awesome we’ve slogged through many a turkey (Dungeons Ampersand Dragons, anyone?) and many a surprising delight. Like, uh… Vampire Hunter D. I… guess.

Anyways, after a several-year hiatus, Jesse and I are back in the saddle, for realsies this time. We’ll be here at Pornokitch once a month, talking smack and offering up praise when either (or both) are warranted.

Don’t call it a comeback. We’ve been here for years! 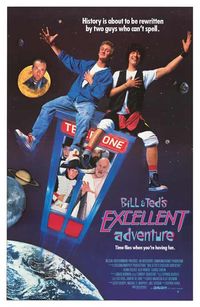 Responsibility Roundup: Directed by the most triumphant Stephen Herek (Critters, Don’t Tell Mom the Babysitter’s Dead). Written by Ed Solomon and Christ Matheson, who also co-wrote Bill and Ted’s Bogus Journey, the animated Bill and Ted’s Excellent Adventures, and Mom and Dad Save the World. While Solomon later worked on blockbusters like Men in Black and Charlie’s Angels, Matheson’s solo career peaked with 1994’s A Goofy Movie, though word on the backlot is he’s writing a made-for-TV reboot of The Greatest American Hero. The supporting cast is a who’s-who of who’s-that character actors, including Amy Stock-Poynton (Summer School), Bernie Casey (In the Mouth of Madness), Dan Shor (TRON), Terry Camilleri (The Cars That Ate Paris), Hal Landon Jr. (Eraserhead, The Artist), and Jane Wiedlin of the Go-Go’s as Noah’s wife. Hauntingly sincere performances by leads Keanu Reeves (pretty much everything) and Alex Winter (pretty much nothing), and, of course, George Carlin (duh).

Quote: “Strange things are afoot at the Circle K.”

Alternate quote: “It seems to me the only thing you've learned is that Caesar is a ‘salad dressing dude.’”