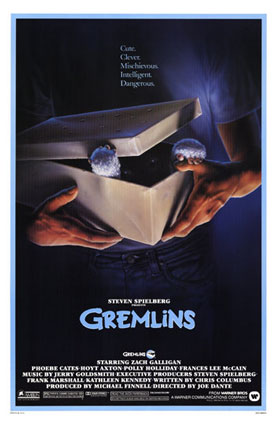 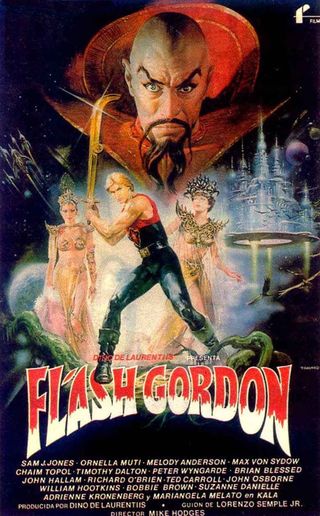 By the 1970s, sci fi cinema had bloated from its Golden Age roots into something outsized and overwhelming and almost tragic. It was all about the bombast; the skin-tight outfits with their bright colors and spangled cloth and flapping capes; the mediocre effects; the improbable rubber creatures. These films were stuffed to the gills with pretentious Greater Meaning, often cheerfully undercut by generous helpings of lame humor.

Star Wars changed everything. Although the worst excesses of the genre weren't all immediately (or entirely) carved away, Star Wars made it clear that the sun was setting on a certain kind of sci fi movie. The sparkly body-suits, the papier-mâché monster-masks and the middle-school humor didn't just look dated in comparison with Lucas' lean east-meets-west aesthetics and basic chosen-one narrative - they looked cheap. Perhaps even worse, they looked tawdry.

I feel an appealing kind of dissonance when I watch a post-Star Wars film of the pre-Star Wars family. Ray Harryhausen's epic, wonderful, utterly ridiculous Clash of the Titans, for example, seems like a product of about 1963 - not the 1980 blockbuster it (really!) was. These films feel so strange, so charming, so innocent, and so misguided: the work of people who simply hadn't made peace with the fact that the Golden Age of bodysuits and space-needles was over. Perhaps no film rages against the dying of that Golden light more than today's Monsters & Mullets entry, 1980's Flash Gordon.  A lodge in a garden of cucumbers, Flash Gordon is about as un-Star Warsy as they come.

Monsters & Mullets is the bastard child of my obsessive devotion to '80s high fantasy films.  Despite my deep affection for Rankin & Bass' made-for-tv animated adaptation of The Hobbit, however, I began work on the series knowing it was out of bounds.  The Hobbit, after all, came out in 1977.

Also, The Hobbit teaches us something we may not have realized before:  Gandalf is kind of an asshole 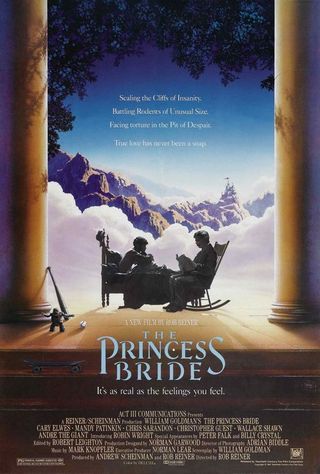 The Princess Bride. This isn't a "does it hold up" kind of post, because, frankly, I'm so prejudiced in this film's favor that I couldn't possibly watch it with even the barest pretense of impartiality.  I wholly and unreservedly love The Princess Bride, the end.  So instead we're going to talk a bit about why The Princess Bride is important.  And awesome, of course. And continually worthwhile.  And why it wholly deserves its spot at the eleventy-billion-percent awesome end of our Monsters & Mullets Comprehensive Awesomeness Spectrum.

I'm sure every generation prides itself on having the privilege of growing up with the best, most quotable movies.  But, seriously - did any decade have it better than we did in the '80s?  No only did we have Star Wars, Indiana Jones, Heathers, The Wrath of Khan, Ferris Bueller, Airplane! and Aliens, we had The Princess Bride.  Is there any single movie that's more quotable?  More quoted? 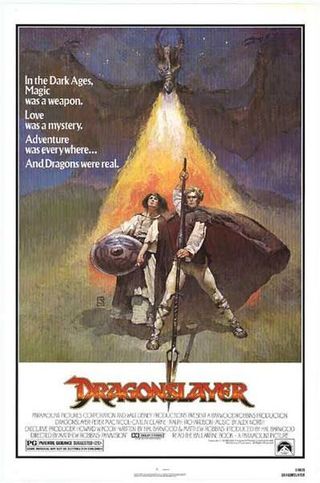 We've talked a bit about revisionist takes on genre already this week, albeit in terms of novels.  It's only appropriate, then, that we tackle revisionist cinema, as well.

It took us two days to make it through today's Monsters & Mullets feature.  If we hadn't been watching it for the purposes of review, we probably never would have finished it.  Dragonslayer's not great but it's also not terrible - at least, not on par with a few of our other features.  Dragonslayer, however, is this: an hour and forty minutes of draggy-ass dull.  Many of our other features have been enlivened, if not redeemed, by something: a charismatic actor, or maybe an interesting sub-plot.  But Dragonslayer has none of these things.  Indeed, Dragonslayer has the opposite of these things: bored actors and boring storylines.

The movie also stands as a testament to the problems inherent in revisionist storytelling.  In theory, Dragonslayer is a film that puts paid to the old fashioned hero quest, being as it's about an unlikable and ineffective guy who thinks he's gaining power and authority but ultimately, discovers he's been nothing more than the pawn of the people he trusted.  This is really interesting stuff, folks!  This has the potential to redefine the entire genre!

Again, in theory, Dragonslayer is a mischeveious, revisionist take on the high fantasy hero quest.  In practice, it's a boring, derivative, billion-hour-long slog about the unlikable doing the unthinkable in service of the unknowable.  Let's have at it, shall we? 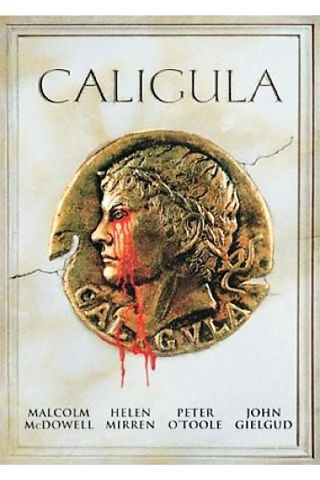 The '70s were such a weird time for cinema, right?  Cinemas were bursting with war movies and anti-war movies, heavily stylized masterpieces and equally as heavily naturalistic films, disaster films and raunchy comedies. The blockbuster was born, the studio musical died, and the influence of French New Wave trickled into Hollywood. A new generation of film school brats butted up against institutionalized ideas about cinema so dated that movie-goers could smell the embalming fluid leeching out of the screen.

Into this world came Caligula, the 1979 arthouse fuck-flick that promised to shock and titillate like no other.  It starred major actors, it was written by a respected author, it was based (loosely) on historical events, and it was about... well, it was about a guy who shagged his sister and elected his horse senator.  If Caligula wasn't about Modern Life, nothing could be. Caligula was deep, man. Deep.  And dark.  And sweat-stained.  And uncomfortable.  And crusty, and I don't mean "old fashioned."

Naturally, I sat us down in front of the 156 minute, wholly unexpurgated, wholly uncut version. Jared may never forgive me. 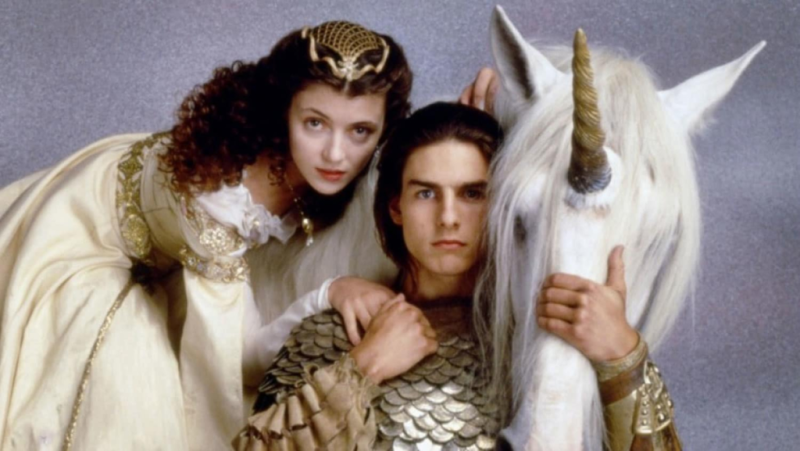 Legend was another staple of the '80s slumber-party circuit.  I mean, really:  princesses, unicorns, and Tom Cruise?  What's an eight-year-old girl not going to dig? 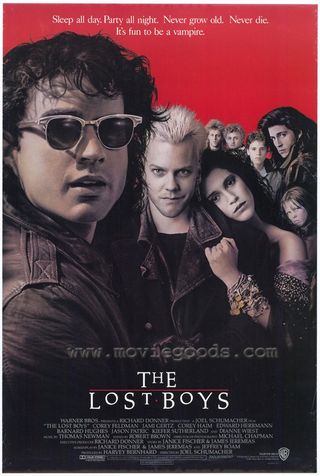 Eighties high fantasy cinema wasn't just boobs and barbarians and mommy-issues.  There were a number of films produced specifically with a young audience in mind, films like Legend, The Dark Crystal, and The Princess Bride.  And why not?  The success of Conan the Barbarian translated into the action-figure-shilling animated powerhouse He-Man, so clearly kids were digging on the swords and dragons stuff.  Why not move into high fantasy cinema?

The high fantasy kids' movies have a lot in common - most were box-office flops that became cult classics and the colossi of a collective youth with the spread of VCR technology in the mid-'80s.  How many of these films did you watch at parties and sleep-overs?  How many did you own?  How many do you own today? How many can you still quote?

Of all the youth-oriented high fantasy films of the '80s, there are three that stand head and shoulders above the rest.   The Princess Bride ("never get involved in a land war in Asia!").  Labyrinth ("You have no power over me!") And, of course, The Neverending Story. I'll bet you can still hum the theme song, maybe even sing a few lines of it - "the neverending stoooooreeeee," that synth-heavy, reassuringly wholesome power ballad with its up-inflected lyrics and melodic waterfall of "ah ah ah"s.  Was Artax the horse's muddy demise in the Swamps of Sadness your first real and meaningful movie death?  Were you horrified by the wolfy-monster-thinger's unalloyed villainy; grossed out by the giant turtle's sneezes; charmed by the dog-like luck dragon and his itchy ears?

Frankly, as a kid growing up in the heyday of '80s high fantasy movies, The Neverending Story was at the top of my list.